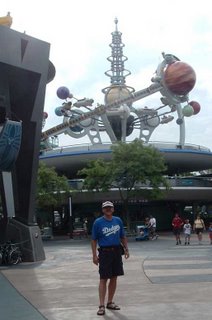 (I'm BACK! I spent the last week visiting other worlds, filled with robots, fantastic voyages and more! See?)

As I write this, I'm soaking wet - due to having moved a car into the garage for fear of an approaching hailstorm. It gives me a little appreciation for the Klingon slang word for "to be safe" - QaD, literally to be dried out. Anyone caught in a summer thunderstorm can appreciate the link to "keeping dry" as being "safe."

You'll note that my KLV didn't map the word 'safety' - that's due to the relative infrequency of the word safety (19 times) or safe (13) in the WEB translation. As I've noted, my initial creation of this "relexified" (not translated ) text only touched on FREQUENT words, used more than 100 times in the English text. I've relaxed that rule - especially as I've done these studies, but "safe" and "safety" haven't made the cut yet. And, of course, safety is rarely a priority for Klingons.

vaD SoH, joH'a' mob, chenmoH jIH yIn Daq safety.
For you, O LORD alone, make me live in safety. Psalm 4:8b
On planet Earth - well on (or off of) any planet (even Pluto! - I'm not giving up so easily on that one) safety IS a concern. From pre-launch checklists to flood insurance, we think about and seek to attain it in many ways.

But. We know there is no guarantee. At the end of these two psalms, 3 and 4, we've heard David oscillate between his struggles and his confidence in God giving him security. This final verse wraps up with David, at last, saying his safety is founded on God alone.

The word here in Hebrew, betach, means to hie for refuge - that is, it acknowledges there is much in this world from which we need rescue. AND it is only God who offers that rescue. We do not find safety in denying our troubles - saying "everything is fine," when it is not.

Perhaps we need to, as David did, come to the end of our rope to realize how much we need rescue - and that God offers it.

Give all your worries and cares to God, for he cares about what happens to you.
(1 Peter 5:7 NLT)

Then we'll know the answer to this life's bad news:

He will not be afraid of evil news. His heart is steadfast, trusting in the LORD. (Psalm 112:7)
This life will bring us storms - real and metaphorical - and it is not always possible to be QaD, safe. But there is one to whom we can always turn, for He will always give us that safe port in every storm we need.

Gladness in my Heart!

You have put gladness in my heart, More than when their grain and their new wine are increased. Psalm 4:7
(click for podcast)
We don't know much about how Klingons face death. Yes, bravely, and yes they have a loud cry to warn those in the afterlife that a great warrior approaches. They also have legends and beliefs that, well, hardly parallel the Biblical message - any more than my Scandinavian ancestors did. And, of course, that's why we - Klingons and Humans - need someone to give us the witness of scripture, because without it we DON'T know that we can face death - and life - with gladness.

I've seen this. I can picture it in funerals I've been at - my mother's and my father's for example - that were great celebrations. Even in the midst of grief, no one could mistake the confidence and gladness that attended the services.

Gladness - that's the word we consider today. Simchah in Hebrew, it occurs more than 80 times in the Bible. From a root, sameach, to be blithe, or gleeful. You may hear that word at celebrations in Israel when people would call out "hag sameach," happy holiday!

This gladness is an adjective we might covet for our lives, but not always find. One tlhIngan Hol word that might do would be "tIv" - to enjoy, but I used - constructed really - a far longer one - Quchqu'taHghach, from Quch, be happy, plus the intensive qu' plus, taH, on-going. All wrapped up with the nominalizer -ghach: Quchqu'taHghach. With the small known Klingon vocabulary, we could connect this to "blessed", at least for ashri, which in Hebrew, meaning "happy" or Quch. It is interesting to note the Hebrew and Greek scriptures include a word for "blessed" that means "happy."

This connection of being happy and blessed, even in the midst of grief is fresh in my mind, as I return from the funeral of a good friend. Again, a remarkable scene of witness to joy, despite grief. A compelling example for believers.

This verse comes at the end of a psalm - really a pair of psalms (3 and 4) that come from a desperate moment in David's life, a time when he was on the run for his life. And STILL he had confidence in God's care. Still he could say:

You have put gladness in my heart, More than when their grain and their new wine are increased. Psalm 4:7
The Life Application Bible reflects on this kind of gladness, saying:

That's the goal. Not to have happiness that comes from temporary fortune, but rather to achieve inward joy - gladness that lasts, not for the moment, but on into eternity. That's what David found in God's gracious love - and so can we.
Posted by Joel at 1:19 PM 2 comments:

"don't for a minute let this book of the Revelation be out of mind" Joshua 1:8 Message
(click for podcast)

At this moment I'm getting ready to blast off. I'm heading out into the blue to a conference in Las Vegas. It won't be a long trip, and getting ready to go brought my mind to matters of packing, and unpacking - traveling light. This called this verse to mind from Joshua. At the end of the long journey, the Israelites are ready to unpack - settle in after decades travelling away from slavery in Egypt. They are going to have homes again - they'll no longer need to - as travelers must - carry everything with them.

Except. Joshua is given this command from God, essentially what NOT to unpack:

This book of the law shall not depart out of your mouth, but you shall meditate thereon day and night, that you may observe to do according to all that is written therein: for then you shall make your way prosperous, and then you shall have good success.

I was drawn to this verse over 30 years ago when a group called the Navigators introduced me to Bible memorization - the systematic effort to follow these words, to as the Message translation puts it:

Rather this law, or torah in Hebrew is the TEACHING, including laws, but including the whole direction of Scripture. The root is yarah, a word meaning to throw, or point - give DIRECTION. There is a way that God intends to lead us - his torah is in the whole of scriptures that Paul reminds us

is profitable for teaching, for reproof, for correction, and for instruction which is in righteousness 2 Timothy 3:16

Good things to hang onto!

Lately I've been learning about the another alien culture. Certainly as fierce an opponent as Klingons (if not more so) they are the Mando'a or the Mandalorians. The most famous of them are Boba Fett and his father Jango. Like the Israelites of Moses's day, they are a nomadic people. While a much more martial people than the Israelites, they too are noted for keeping their words, their stories and traditions alive - keeping them in their mind at all times. You can find links to their language and my rough "translation" of a Mando'a Bible at MNDBible.MrKlingon.org. This translation, like the KLV, is a simple word replacement effort - these words from Joshua come out as:

ibic book be te law shall not ba'slanar out be gar mouth, a' gar shall meditate bat bic tuur bal ca, ibac gar may ja'hailir at narir according at an ibac is written therein: par then gar shall gotal'ur gar way prosperous, bal then gar shall ganar jate success

"don't for a minute let this book of the Revelation be out of mind" Joshua 1:8 Message
What words can't you forget? That you are TRYING to remember -- for some of us there is a struggle to remember the passwords and PIN numbers that modern life requires us to keep, for others it is schoolwork and things we are trying to learn. It always seems like SOMETHING needs to be kept in the memory bank.

But if we draw into our hearts the words of God and make them part of our everyday kit - then we'll be equipped and well armed for the day.

Then, as Paul puts it, we'll be "complete, thoroughly equipped for every good work."
Posted by Joel at 11:23 AM 6 comments:

Joel
Sometimes known as MrKlingon, Joel Anderson, who, despite rumors to the contrary, is not a Klingon. He is however: * A Software Engineer who has worked in software development and the telecommunications industry for over 20 years. He still remembers the "good old days" when computing online meant dialing with a rotary phone, using his VIC 20. * A science fiction enthusiast, Joel may occasionally need to be reminded that he is a human, from Earth. * A language hobbyist who enjoys building programs that use science fiction languages, especially those found in the worlds of Star Trek and Star Wars.